It’s almost Fall! In theory that is…here in South Texas, we kind of just pretend to have a fall, but really it’s just a slightly cooler version of summer. We’ll take it though, any reprieve from the heat is welcome!

We’ve been unusually busy during the past few weeks and the autumn equinox snuck up on me. I’m usually really good about putting seasonal books on hold at the library, but that didn’t happen for this change of seasons.

We’re making it work with what we have and will be exploring the Harvest Moon this week as part of our nature study curriculum, Exploring Nature With Children.

We have a few fall books we have and love including Fletcher and the Falling Leaves; Hello, Harvest Moon; Woody, Hazel & Little Pip; and The Autumn Equinox, and We Gather Together.

I also wrote a short story to share at our nature-inspired co-op. Mr. Fox & the 10 Suns is a gentle harvest moon story. It was inspired by the Chinese legend of Chang E, but adapted for my little ones (ages 3 and 6).

When is the Harvest Moon?

The autumnal equinox for 2020 is Sept. 22 which makes the Harvest Moon on October 1.

The Harvest Moon is a sign that autumn is near. Children can feel that change is in the air. Tracking the moon and noticing the different phases is so helpful in grounding children and giving them a sense of rhythm with the Earth.

When the full moon approaches, our family loves to plan a full moon night where we take a walk and enjoy the moon together. My children typically go to bed before they get to see the moon so this is a real treat!

Sometimes, we take extra time to stop for a moon watching picnic and share in a small treat or drink to celebrate the season. The mulled apple cider from the Rooted Childhood September Collection would be perfect for this!

We also love to sing songs and tell stories during our celebration. Festive songs add a lightness to the walk and make it oh so special!

Here’s a favorite song we love to sing during our Harvest Moon night.

There are a few stories we love to tell too. I wrote one of them year ago when my oldest two kids were 3 and 6 and it is still a favorite today! Scroll down to the bottom of this post for a printable version of the story!

An original story by Meghann Dibrell

Once upon a time there lived a wise old fox deep in the woods among the ancient oak trees. Mr. Fox had 10 sons who spent their days making trouble, frolicking in the fields playing tricks on the other forest animals.

On one otherwise quiet afternoon, the 10 unruly fox brothers decided to play a game of hide- and-seek where they disguised themselves as 10 fiery hot suns, rising high above the Earth to shine on all below.

With 10 suns in the sky, the forest grew very, very hot. The leaves became dry and brittle. Acorns turned black and crumbled right down out of the trees. The soft forest floor was scorched and grew very hard.

Mr. Fox was terribly upset with his sons. “Come down here right this instant!,” he called out to the 10 suns in the sky. But the 10 suns only laughed, “Ha, ha, ha!”

Mr. Fox was furious. He ran swiftly through the forest until he found his friend the porcupine. “May I borrow 10 of your quills?” Mr. Fox asked, gasping for breath.

“Of course,” the porcupine answered. “But whatever do you need them for? Shouldn’t you be hiding in your den to escape this awful heat instead of running around all out of breath?”

“Well, that’s just the thing,” Mr. Fox replied. “My sons have disguised themselves as 10 fiery suns, and will not come down from their perch high in the sky. But I have a plan to get them down.”

Mr. Fox took the porcupine quills and ran as fast as he could, through the oak trees, over the winding river, through a golden meadow and to the very top of Snowgood Mountain. He gathered some sticks and vines and whittled a large bent branch into a perfect bow.

He took the first porcupine quill from his pocket, placed it on the string of the bow and woosh! He aimed the quill right at the first sun making it fall from the sky and back to Earth.

He took the second quill and woosh! The quill went straight to the second sun making it fall from the sky back to Earth. And he did the same for the third, fourth, fifth, sixth, seventh, eighth and ninth suns.

Mr. Fox reached in his pocket for the very last quill to shoot down the very last sun. But the porcupine quill was gone! “Oh no! I must have dropped it as I ran through the oak tree forest and over the winding river and through the golden meadow on my way here to Snowgood Mountain!”

As Mr. Fox sadly cried and his tears fell to the ground, the Queen Mother reached down from Heaven to console him. “There, there,” she said.” “You have saved the Earth from nine of the scorching suns. We will make a deal with the one sun left in the sky to rise and shine on Earth each day for a time called morning and to set and rest behind the mountains for a time called evening.

The sun agreed to the plan to save himself from being shot down back to Earth. But being that he was a trickster, the Queen Mother wanted to keep a close watch on him. She decided to build her palace on the moon, the nearest place to Earth on Heaven. And there she waits, with her white rabbit to make sure the sun keeps his end of the bargain.

Mr. Fox and all of the forest animals cheered and clapped and danced when they realized the scorching suns were no more. Each year at harvest time, they gather acorns and nuts and berries and all of the bounties of their great harvests to offer the Queen Mother and her white rabbit in the moon as a gesture of gratitude and goodwill.

Like this story? Scroll down to the bottom of this post for a printable version that includes some adorable printable puppets! 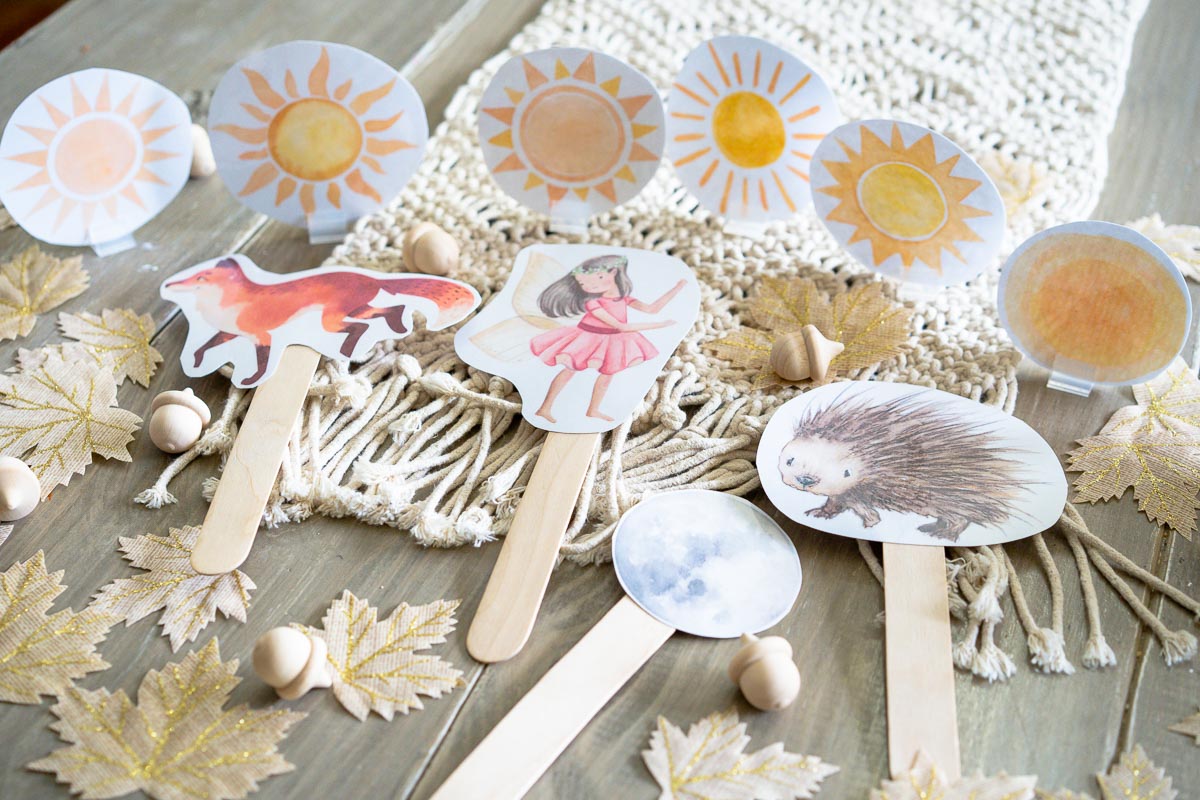 The Art of Storytelling

We love telling stories, especially about the changing of seasons. Storytelling is such an amazing tool to reach the hearts and minds of young children. If you’re new to storytelling, here’s how I prepare for a story.

Then gather your little ones, and tell them the story, from the heart. They won’t know if you miss a detail or mix up the plot a bit. Storytelling is an art, and you are the artist. Have fun with it!

Love this story? Pin it on Pinterest to have it for next year!

Celebrate Michaelmas with us and save this for lat

Build-a-Boat Challenge! Save this because you’re

Yesterday we hosted a biography fair for some of o

Let’s paint a unicorn! A few weeks ago my 5yo d

There is not much of importance that can be filled

A Harvest Moon Story: Once upon a time there liv

Is kindergarten necessary? Nope! Are some kids rea

Take your lessons outside with this super fun walk

Wide open spaces to explore are such a blessing in

Advent beings a time of waiting. We spend each day

My baby turned 5 last week! And yes, we still call

Does your family prioritize travel? We just got

Do you believe a scope and sequence is required fo

I remember the giddy feeling I got when my oldest